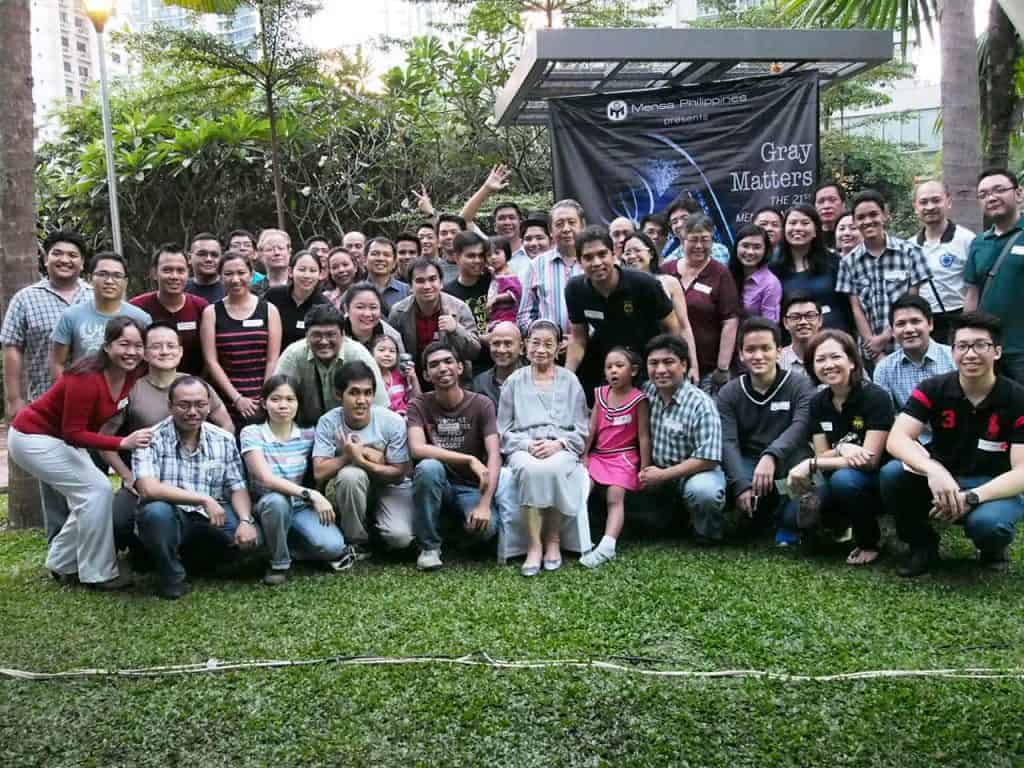 Mensa Philippines has had a colorful history throughout its almost 25 years of existence. Here are the highlights of our organization.

1992   Mensa Philippines is established by local members of Mensa International. It holds its first ever testing session on September at the Manila Peninsula Hotel, with over 200 people taking the Mensa test. The organization holds its first ever meeting on October 3, also at the Manila Peninsula Hotel. Mensa Philippines is featured in various media, including Taipan Magazine, and “The Inside Story” on ABS-CBN TV.

1993   Mensa continues getting media attention, with coverage in various publications and even main features about its members in women’s magazines.

1994   Mensa holds MENSART, the Mensa Art Exhibit, featuring various artworks by its members, on June 23 at the Le Souffle Restaurant and Wine Bar at Makati City. The event is a success, with many members seeing their artworks sold. A university chapter also opens at the University of the Philippines in Diliman.

1995   Special Interest Groups include the Toast of Mensa Toastmasters SIG, DANSIG (a dancing SIG), a Bowling SIG, a Bridge SIG, a Gourmet SIG, and a Jogging SIG.

2001   Mensa holds a test session in Cebu City. This aside from continuing regular test sessions in Metro Manila, including a major test session at the Philippine Science High School.

2013   Mensa Brown Bags—monthly informal gatherings where Mensans get to learn about a topic of interest from a fellow member—launched. Tie-up with the Headway School for Giftedness leads to an influx of very young Mensa members. The Dr. Reynaldo Lesaca Memorial Awards, honoring the late Honorary Chair of Mensa Philippines, is launched.

2014   Mensa holds its first Amazing Mensa Race, which proves to be a success. Brown bags included an introduction to sailing, while the Adventure SIG (SIG-A) begins its ascent (up mountains). Mensa invited to the advance screening of “Scorpion,” a TV series that featured geniuses. The first awardees of Dr. Reynaldo Lesaca Memorial Awards were announced during the himAGsikan Annual Gathering.

2015   Mensans featured in Who Wants to be a Millionaire, leading to some very compelling television moments. Tie-up between Mensa Philippines and Mensa Singapore mountaineers lead to a trek up Mount Kinabalu. Annual Gathering features a premiere of Star Wars: The Force Awakens.

2016   Mensa holds its first major qualifying exam in Cebu in fifteen years, leading to the start of an active local chapter. Brown bags include a whisky workshop that educated its participants on the fine art of whisky appreciation.

2017   Mensa launches its revamped website www.mensaphilippines.org, complete with a membership portal, member services, online store, and ASK MENSA ANYTHING, our own version of Quora, Yahoo! Answers and Reddit AMA.