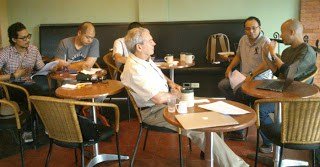 Mensa had its
first official activity for the year in the form of the first run of
the Mensa Brown Bag Sessions. This was held last January 12 at the Baang
Coffee shop at Tomas Morato, Quezon City. The kickoff topic was “(Most)
Everything You Need to Know about Branding,” which was delivered by
Mensa president Art Ilano.

The Mensa Brown Bags are envisioned to be monthly (well,
near-monthly) opportunities for members and guests to learn from
volunteer Mensa speakers who will talk about topics of potential
interest. Topics can range from the erudite to the speculative, from
professional pursuits to esoteric hobbies, and from the serious to the
downright silly. It doesn’t matter. If you think someone will be
interested in what you have to speak about, then this is the venue for
you!

The branding talk was well received and saw an audience of eight
Mensans (a nice cozy number) come together. The only catch was that the
venue turned out to have bad acoustics, so the group acknowledged this
and concluded that other venues should be considered for future
sessions.

Interested in sharing something with fellow Mensans? Then sign up as a Brown Bag speaker at [email protected] !